Our duck calls are the result of almost 50 years fascination with waterfowling and everything associated with it.  It all began with my grandfather introducing me to duck hunting in the flooded timber bottoms of Arkansas and witnessing for the first time the beauty of ducks whiffling through the trees and the companionship of fellow hunters.  Since that time my father and I, and later my son, have enjoyed yearly hunting trips back to Arkansas. Locally, my pursuit of waterfowl takes place in the tidewaters of coastal Georgia and the river swamps of the Altamaha River.

It was on one of our Arkansas trips more than twenty years ago that I first saw a duck call being made and became determined to make my own duck calls.  Shortly afterwards I bought a lathe and made a  few very crude calls but then went on to other pursuits.  In 2001 I resumed making calls and now make approximately 50 duck calls per year.  I'm proud to be one of the callmakers to be included in the recent book, "Custom Calls Vol. II, Duck and Goose Calls from Todays Craftsmen ", by James Flemming, Jr. Our calls have als been featured in Waterfowl Magazine as well as Ducks Unlimited Magazine

I've always enjoyed making sawdust and in addition to call making have carved decoys and built a number of small boats. 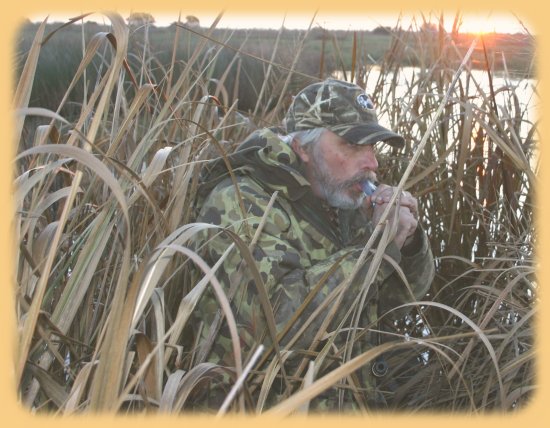